Around 1810 (the 7th year of Bunka), coal was found in Hashima (nicknamed Gunkanjima).

Around 1890 (the 23rd year of Meiji), 80 years later, Mitsubishi Corporation purchased the island and started full-scale mining.Hashima’s good quality coal contributed to Japan’s modernization along with the neighboring island, Takashima.

The island developed rapidly, proportionate to its increased output of coal and as many as 5267 people were living there in 1960 (the 35th year of Showa). It was said to have the world’s highest population density, 9 times that of Tokyo.

Furthermore, more than half of the island was a mining area with workers’ domitories, schools and the hospital occupying the rest of the land.

In this area of dense population, people were on good terms with each other as if they were one family.

Gunkanjima has kept attracting many people.
The ” Ruined Island ” still excites a feeling of people’s curiosity to this day, because the whole island remains as a prosperous time.

In the island, we can feel life in Showa through home electrical appliances neglected and traces of life.

In 2009, the ban on landing on the island was lifted and many people visit the island in these days.

Would you like to experience the history and the charm of the ruined island?

Past and Present of Gunkanjima

In 1974 (the 49th of Showa), Hashima coal mine was closed as the principal energy demand shifted from coal to oil. People left the island with a variety of emotions. 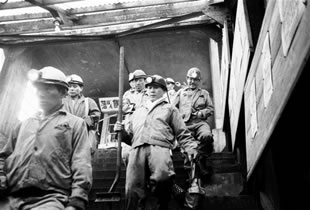 How were they feeling as they went up and down these stairs?
Coal miners’ faces showed relief as they returned from their risky underground work. 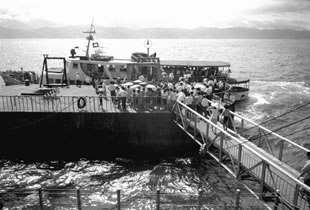 The gateway to the island and the boat, the only means of transport.
Now there is no regular service between the main land and the island. 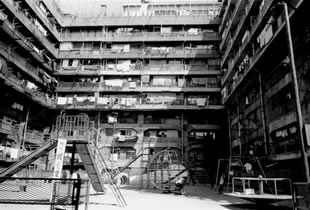 The massive apartment with 300 households was the largest apartment building on the island.
On the rooftop of the 9th floor was a nursery school. You might feel as if you can hear people’s voices. 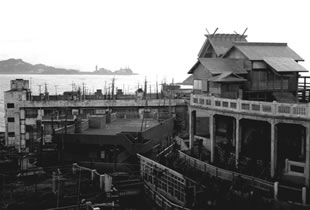 Hashima shrine stands on the highest place on the island.
It was the place for prayers for the safety and for memorial services for the deceased.
It was also a place of recreation for children and for spring festivals. 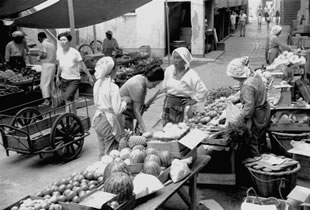 Many peddlers sold out of their fresh food in the morning.
This marketplace used to provide food for 5000 people. 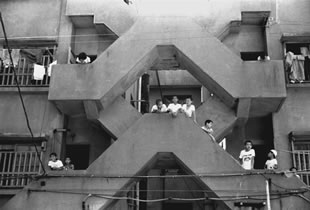 This staircase was unique for Hashima.
They are not only functional but also well designed. 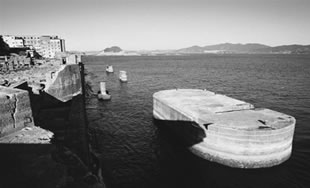 A view of the pier after closure of the mine was decided in 1974 (the 49th year of Showa).
Almost every day paper streamers were thrown in the air as people left the island.
After 3 months, all the people had left. 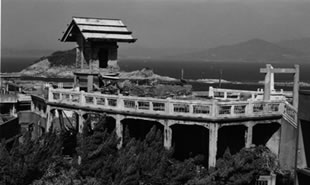 The Protective Deity for This Island

Hashima shrine with the protective deity for this island.
Now, only the small shrine stands with dignity. 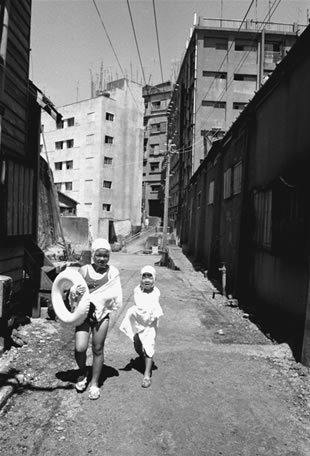 The Road to the Pool

This road was used to go to the pool in summer.
Now, lines in the pool showing the site of it, still remain. 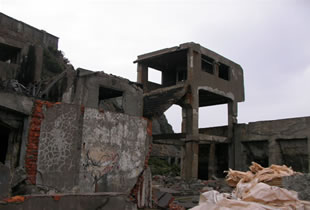 At the sight of the entrance, you can imagine seeing coal miners. 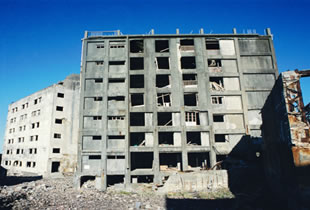 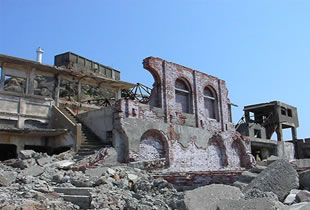 The Site of the Administration Office

Many people connected to the coal mine came and went.
Those weather-beaten bricks still reflect the signs of prosperity. 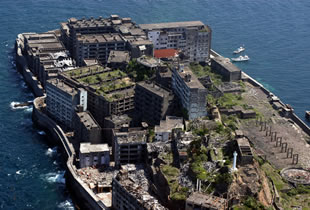 More than 30 years have passed since the closure of the coal mine.
Some of the apartment buildings remain as they were like time capsules showing the everyday lives of the people. 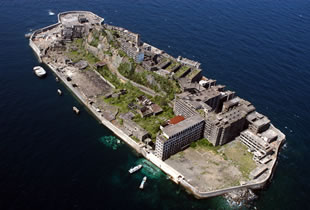 The Island in a Cobalt Blue Sea

The island was once without vegetation.
It may be ironic that the island is covered with much vegetation while being surrounded by the cabalt blue sea even after the people left. 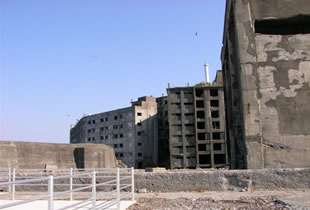 Streets Remain as They Were

Streets remain as they were even after the people left.
You may feel as if you can hear the sound of the crowd.

Hashima became uninhabited just as it was. In 2001 (the 13th year of Heisei) it was officially transferred from its owner, Mitsubishi Materials Corp. (the former Mitsubishi Mining Co.,Ltd) to Takashima-cho, coming into the possession of Nagasaki-City.

In 2008 (the 20th year if Heisei), it was decided that Hashima was to be put on the interim list for the World Heritage as a part of “Industrial Heritages for Modernization in Kyushu and Yamaguchi.” This has increased attention to Hashima (Gunkanjima).

In April, 2009(the 21th year of Heisei), the ban on landing on the island was lifted, making tours on the island available.(*) *Only when safety standards are met.

Payment, thank you in cash on the day. (Credit card is not allowed)

Conditions on landing on and visiting Hashima (Gunkanjima)

To customers of the travel agency